In my search to further broaden my knowledge of the Steampunk genre, I stumbled across this most amazingly brilliant contraption.
AND I WANT ONE TOO!!!

A Steampunk inspired laptop!
Dude, tell me that that laptop is not the coolest freaking thing you have ever seen? I am in awe of the creator's talent. 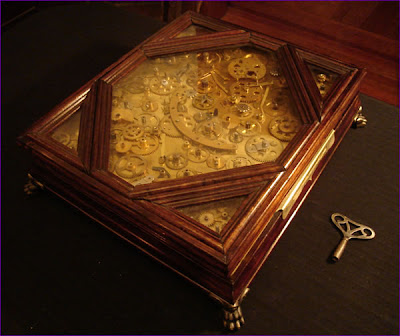 "This may look like a Victorian music box, but inside this intricately hand-crafted wooden case lives a Hewlett-Packard ZT1000 laptop that runs both Windows XP and Ubuntu Linux. It features an elaborate display of clockworks under glass, engraved brass accents, claw feet, an antiqued copper keyboard and mouse, leather wrist pads, and customized wireless network card. The machine turns on with an antique clock-winding key by way of a custom-built ratcheting switch made from old clock parts."--Datamancer from Datamancer.net 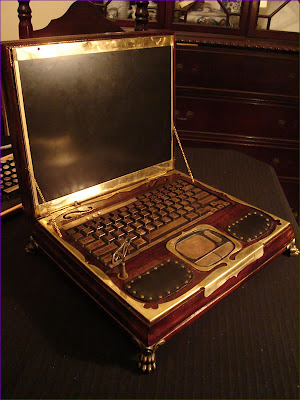 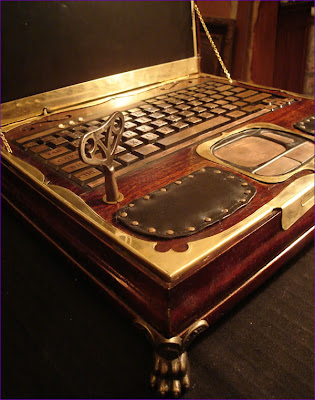 All images taken from datamancer.net

I think that is the sweetest piece of technology I have ever seen. I can only imagine if the artist should ever decide to sell something like that what it would cost.

How neat would it be to have this motif decorating a room. I can so see my library room with clockworks, brass and wood decorated pieces. Some of the stuff I found was a little creepy but i guess there are different levels of tastes in any genre. I really do like the Victorian style Steampunk look, without the creepy goggles!

Here is a little info about Steampunk--

Steampunk is a sub-genre of fantasy and speculative fiction that came into prominence in the 1980s and early 1990s. The term denotes works set in an era or world where steam power is still widely used—usually the 19th century, and often Victorian era England—but with prominent elements of either science fiction or fantasy, such as fictional technological inventions like those found in the works of H. G. Wells and Jules Verne, or real technological developments like the computer occurring at an earlier date. Other examples of steampunk contain alternate history-style presentations of "the path not taken" of such technology as dirigibles, analog computers, or digital mechanical computers (such as Charles Babbage's Analytical Engine); these frequently are presented in an idealized light, or with a presumption of functionality.

Speculative fiction is a fiction genre speculating about worlds that are unlike the real world in various important ways. In these contexts, it generally overlaps one or more of the following: science fiction, fantasy fiction, horror fiction, supernatural fiction, superhero fiction, utopian and dystopian fiction, apocalyptic and post-apocalyptic fiction, and alternate history.

Now after reading through those two definitions taken from Wikipedia, I'd say what I've read so far is Speculative Fiction, rather than Steampunk. But then again, maybe not. You know what, how about I just call it all Steampunk, because I like the word :D.

Oh that is SO friggin cool! I would love to have it!

OK. Just need to say. I was at a wedding this weekend with a steampunk theme. I'll be posting pics over at Let's Gab later today or tomorrow. It was... interesting to say the least, LOL.

Dude, that laptop is the coolest freaking thing I ever seen. Dayum, woman, I want one of those too!!

I could totally get into this "Steampuck" design. I LOVE stuff like that! Ultra cool Amy.

OMG I want one!!! Although can't see my boss letting me have one!!

Lori! How neat that you went to a steampunk themed wedding! I am VERY curious to see what the folks were dressed up like.

I found this lamp design and I emailed it to my husband. Maybe he can make it for me. Or help me make it or something! He knows how to do all that electrical stuff and soldering. It's really steampnky neat! And then I found this other site that shows you how to make these really cool clockwork switchplates! And I found on ebay someone who sells watch gears in bulk! I could make those! A little soldering shouldn't be too difficult, right? And a mini torch!

WOW, that looks so pretty, my raven side is mesmerized by the bling bling. Thanks for the elaboration of the Steampunk genre. I will definitely try a novel or two.

No way!...really?!
Omg that is the coolest laptop I have ever seen. I do understand why you crave it.

You have found it - Isn't the stuff they come up with for Steampunk cool...

Sassy from Alternative Reads introduced me to it and I have never left...

Makes a break from the enormous blog roll I go through daily...

Hot damn!!! That is just the coolest laptop I've ever seen!!!

You are right... that is the coolest freaking laptop I have ever saw in my life!!! Nice find Amy!!
Steampunk... I think I just like saying the word!! LOL!!
Hope you had a great day and a wonderful tomorrow!

Oh I'm so glad you all see the same beauty that I do in that laptop! It is just priceless!

Haha, Cecile! I like to say the word too :D.

EH, I have been sucked right in to the Steampunk art on the net. I've been looking here and there at different sights. Some of the gizmos and contraptions that people of made are so neat! I wish I had that kind of creativity for metals and such. Very cool stuff.

I love the word Steampunk, too. The word really does convey its meaning somehow, doesn't it?

I've only read a little of Steampunk, speculative fiction - read lots of this.

I just have become interested in graphic novels and steampunk. My kids collect graphic novels and as a big fan of comic books, I had to try it. Steampunk is something new I've been giving a try. There is also some Steampunk Amine that's kind of fun too. (My kids have also got me hooked on this too, I don't know if you've ever watched Amine, may be to rough for you. Some of its too rough for me. I enjoyed Helsing and Vampire Hunter D, but a lot of Japanese Amine is very sexy - IMPO, should be adult viewing.)

Thanks for sharing Amy, too cool!

That is soo cool!!! I want one. Only concern is how heavy is it? But it looks awesome!!

To a geek like me, that laptop is in it's own world of awesome. That is a really sweet find. Thanks for sharing.

Hey RG Alexander!
Thanks so much for stopping by. I love your Wizard of Oz stories! They are so fun :D.
Isn't that one cool ass laptop? 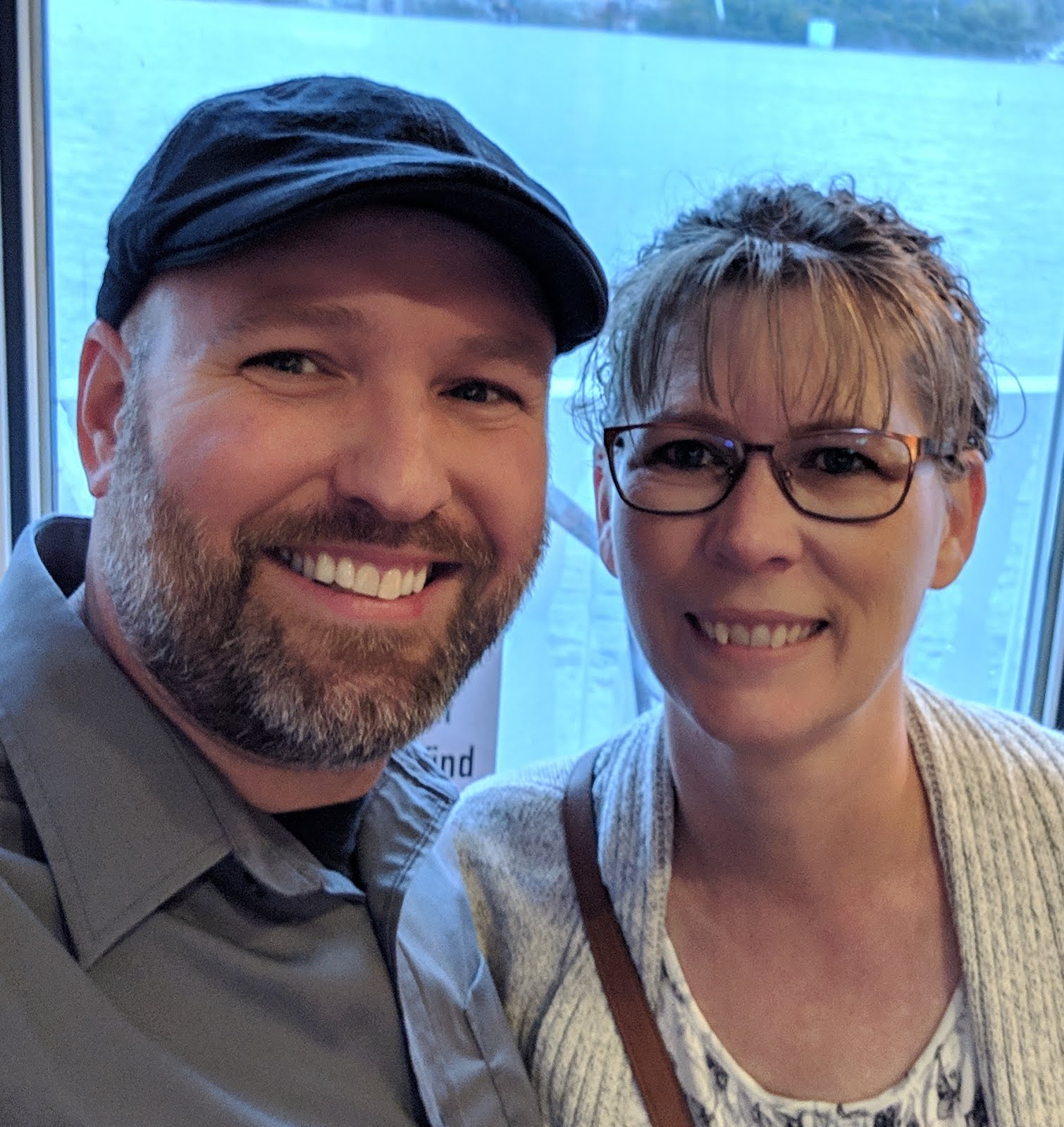